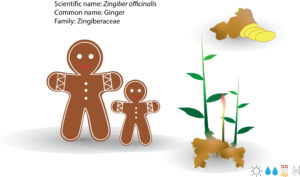 Ginger undoubtedly is a magic plant that possesses incredible healing and disease-fighting powers. Scientifically known as Zingiber officinalis in the family Zingiberaceae, native to southern China but is widely cultivated around the world. Closely related to the well-known species like turmeric and cardamom, ginger is highly valued as a medicinal plant for thousands of years both in India and China. The parts of the ginger that usually consumed are the modified roots known as rhizomes, […]