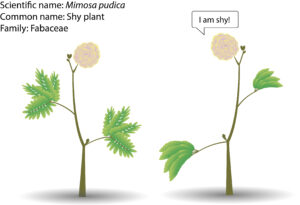 The shy ones from bean family- Mimosa

A large and diverse genus consisting of about four hundred and eighty species is found from Mimosa that is allied to Acasia. Mimosa is a genus of an annual and evergreen perennial plant, categorized as a shrub and small tree under the family of Fabaceae. Unlike animals, plants are sessile, which are often regarded as immotile organisms. Plants do have slow movements that show apparent movement when the growth or movement are recorded using timelapse. […]

Saint Patrick’s Day was made an official Christian feast day in the early seventeenth century and is observed by the Catholic Church. It is a public holiday in the Republic of Ireland, Northern Ireland, the Canadian province of Newfoundland and Labrador, and the British Overseas Territory of Montserrat. According to St. Patrick’s Day lore, Patrick used the three leaves of a shamrock to explain the holy trinity: the Father, the Son, and the Holy Spirit. […]